About a month before I switched to a plant-based diet, I perfected the fried egg. I wasn’t much of a cook back then, so this was a big accomplishment and it quickly became my go-to breakfast. When we gave up eggs,  I must admit, I was a little bummed that I only had a month to enjoy my perfected egg-frying skills. I’m over it now and I’ve learned some great ways to substitute eggs in my cooking: tofu scramble breakfast tacos and flax eggs and chia eggs for baking, but the fried egg seemed impossible to duplicate, until I got this idea to use a fried potato as the fluffy egg white and avocado as the creamy yolk. A “green egg” if you will.

For those transitioning to a vegan diet and facing those early egg cravings or for those just looking for something different than the traditional egg breakfast, this potato and avocado “fried egg” is delicious. It’s really hard to go wrong with fried anything, right?  I could see using this green egg for a vegan eggs Benedict too, stacked on an English muffin with a creamy vegan hollandaise. 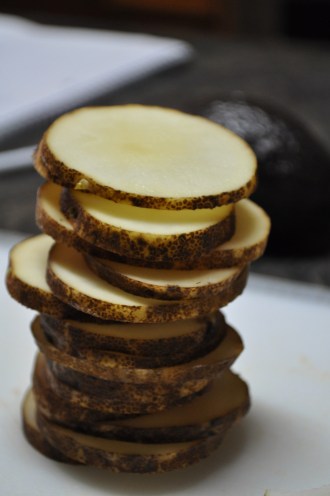 The creamy avocado “yolk” and soft fluffy potato round “whites” give the texture of a fried egg.

(A Vegan Version of Huevos Rancheros)

1 russet potato sliced thin (about a 1/4 inch thick–you want about 12 rounds or 3 per serving)
Oil to coat pan
Salt & pepper
4 Tortillas (smaller taco sized ones, not the big burrito ones)

Directions
In a deep-sided skillet or medium sauce pan, saute onion, peppers, and garlic with a drizzle of olive oil and a pinch of salt on medium heat until soft. Add the tomatoes and green chilis and simmer for about 10 minutes. Transfer to blender (or use immersion blender) and blend until combined into a thick sauce, blend in salt and chipotle powder to taste. Transfer back to skillet and keep warm. 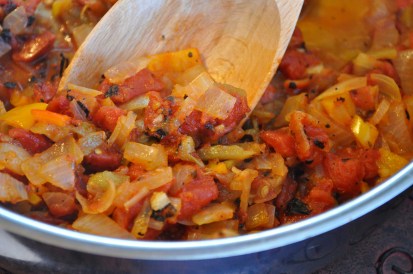 Before blending the ranchero sauce. Look at all that flavor and color!

In a separate skillet (iron skillet works well for this), heat a thin layer of olive oil on medium heat (about a 1/8 inch thick).* Add a single layer of potato rounds and pan fry for 2-3 minutes per side until golden on the outside and soft in the middle (think texture of a french fry.) Transfer potatoes to a paper towel-lined plate and sprinkle with salt & pepper. Repeat, adding oil to pan as needed, until all the rounds are fried.

Golden on the outside, soft on the inside.

In the same pan used to fry potatoes, drain off excess oil and warm tortillas.

Working quickly to keep food from getting cold, put each tortilla on a plate, smear tortillas with refried beans, down the middle stagger stacks of a potato round topped with an avocado round. Top with warm ranchero sauce and optional garnish of cilantro and/or green onions. Serve immediately. Eat with a fork or pick up and eat it like a taco.

*For a lighter version, toss potatoes in a light coating of olive oil and salt & pepper, line them on a baking sheet sprayed with non-stick spray and cook under the broiler for about five minutes on each side or until cooked through (like these Blistery Balsamic Potato Chips).

* Make it kid-friendly: (leave off the sauce or make a milder version without the chili peppers or chipotle powder) 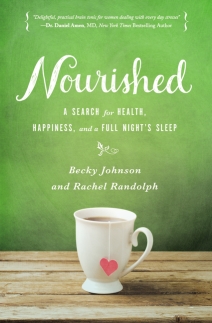