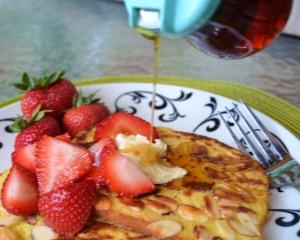 I don’t know exactly when it happened, but at some point Sunday nights became our traditional Breakfast-for-Dinner Night.  In addition, when someone is feeling poorly, breakfast may be summoned at anytime of day.  There’s something comforting about a bowl of soft scrambled eggs and buttered toast when you aren’t feeling quite up to par

Yesterday, my six-year-old grandson Georgie battled a headache off and on all day. By evening, when  I got him in our tub — usually a special treat because it is so big — he looked a sad figure, sitting there in the water, holding his forehead in his hand. “Nonny,” he said pitifully,”will you please go to my Mom’s bathroom and get the Ocean Breeze soap that she usually uses? I just can’t deal with other people’s soap right now.”

I am pretty sure this will be our family’s new phrase in response to generic overwhelm: “I just can’t deal with other people’s soap right now.”  Whether your family enjoys  a traditional “Breakfast for Dinner Night,” or someone’s needing a little comfort food or “you just can’t deal with other’s people’s soap anymore,” here’s a dish sure to comfort and please, anytime of day or night.

I love French Toast, but when the bread has not only been dipped in egg (flavored with Amaretto) but also coated with a thin layer of  sliced almonds before being grilled in butter… well, as my husband Greg said, “That’s the best French toast I’ve ever had in my life.”  Top these crunchy, almondy French toast with butter, fresh sliced strawberries, real maple syrup and serve with a side of sizzling bacon or sausage and your day (whether it’s morning or evening) will take a sharp and instant turn for the cheerier.  And vegans, do not worry! There’s a terrific vegan alternative for this recipe at the end of the post.

Heat skillet to medium high, melting the butter with the olive oil and mixing in the pan with the edge of a pancake turner.  In a low wide bowl mix beaten eggs, milk, almond flavoring or liqueur and pinch salt. Dip bread, both sides, into the egg mixture, shaking off excess.  Lay each piece carefully in the hot skillet, and then sprinkle the tops, evenly, with about a tablespoon of the sliced almonds. Using the back of the spatula pat the nuts into the bread with gentle pressure (this will help them stick when you turn the bread).  When the bottom of the toast is getting golden brown, gently turn the bread with a wide pancake turner,  and cook until the almond-side of the toast is  golden, fragrant, toasty and crunchy.  Top with berries, soft butter and a nice drizzle of real maple syrup.

Vegan Version. Use 1 cup of unsweetened almond milk plus 1 T. flour, 1 T. nutritional yeast (gives it an “eggy flavor”) and 1 T. maple syrup and 1 t. almond flavoring or amaretto for the “egg  mixture.”  Substitute vegan butter for the dairy butter.   This will actually coat six pieces of French toast rather than four.

More Variations:  Try adding cinnamon or nutmeg to the egg batter; or use orange juice instead of almond milk and a bit of orange zest. Thawed, heated sweetened previously frozen dark sweet cherries would also be wonderful with this. Substitute vanilla or rum flavoring for the amaretto or almond.

When my little sister  (also named Rachel — my daughter is her namesake) was about eight years old, she went along with my mother to visit a little girl from church who was in the hospital.  (The child had been very ill, but was on the mend and would have a full recovery.)  Apparently the child looked painfully thin to my sister, because Rachel took one look at her then announced to my mother and all standing around the sick bed, “They just need to give that girl some CAKE!”

From that day forward, whenever anyone announced they were feeling poorly, someone in my family would inevitably advise, “All you need is some CAKE!”

I can see why my little sister thought cake would cure anything that ailed a body.  My mother was a champion cake-baker back in the 70’s before she had to get serious about cutting out sugar for her health.  Most Saturdays would find her frosting a homemade coconut or Italian Creme or carrot cake.  We kids would salivate around the kitchen counter in anticipation.  We would eat the cake in small slivers, because our theory was that three thin slices had less calories than one thick slice.

One of the cakes Mother made frequently was called Wacky Cake (some call it Depression Cake) because the ingredients were always on hand (it does not have any milk, butter or eggs) and you simply stir it up in a bowl (no mixer). You don’t even have to grease the pan.  My brother always requested this cake for his birthday with a simple vanilla icing.

My husband had out-patient surgery this morning,  and after I made him a healthy vegetable stew,  I remembered my sister’s advice and decided give him some cake!  In searching for vegan-friendly desserts for Mother’s Day this weekend, I remembered Mom’s old stand-by, Wacky Cake.  My favorite cake is German Chocolate so I created a vegan-friendly  coconut-“butter”-almond  frosting for this cake, but used chopped almonds instead, to give it a bit more crunch.  Success!!  Though I cannot claim that this cake is healthy,  it is delicious, and it is vegan.  I couldn’t resist eating a piece of it while still warm, moist and falling apart.  Heavenly.   If you have vegans in your family, or anyone who cannot eat dairy or eggs, this is a wonderful recipe for a special occasion,  and both the cake and the frosting are super easy.

Mix flour, sugar, and cocoa powder and baking soda with a wire whisk. All the rest of the ingredients and whisk again. Pour in an ungreased 9 by 11 inch pan.  Spread evenly. Sprinkle with chopped almonds. (The almonds on top will naturally “toast” and give the cake a delightful extra layer of crunch under the frosting.)

1/2 cup organic coconut milk  (If the coconut milk has separated in the can, use mostly the cream that rises to the top of the can.)

Mix all of the above, except coconut and almonds,  together in a saucepan. Bring to boil and while stirring,  boil for a full minute. Take off heat.  Add coconut and almonds. Pour over cake and spread evenly.  Serve warm, room temp or cold!  It is delicious anyway you slice and serve it.

This was printed from: We Laugh, We Cry, We Cook
The site URL: http://welaughwecrywecook.com
The Title:  Chocolate Coconut Almond Cake (Vegan Friendly)
The URL: http://wp.me/p1UwM9-hJ