← Our book, Nourished, for $2.99 on Kindle!
Declaring Personal Independence from Stress → 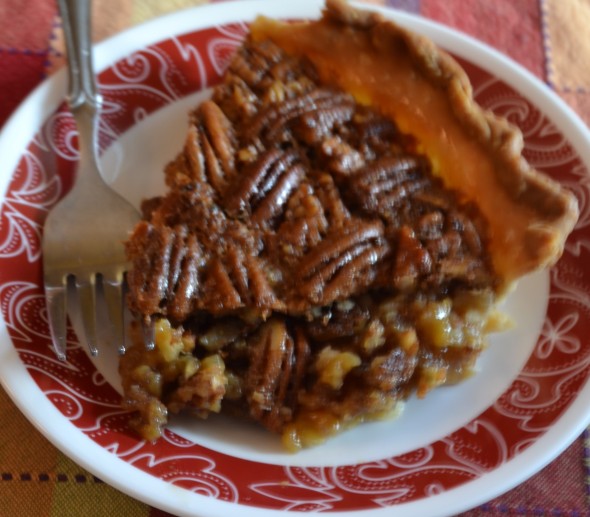 It’s the morning after Thanksgiving, my favorite part of the holiday.  I’m going over the post-food highlights the way the guys go over the after-football game highlights.

The absolute funniest and surprisingly tastiest part of our meal was the turkey.  I gave it a good massage with oil and butter and seasonings, stuffed the cavity with celery and garlic then tucked it into a cooking bag. Finally I put the who shebang into an electric roaster. (By the way, a wonderful purchase to free up your ovens on holidays.)  Several hours later I asked my husband to turn off the roaster.  He did not hear me and I was busy with guests… and well, that turkey roasted itself an extra 2 hours at 325.

When it was time to “deal with the bird” my sister-in-law Gail and I positioned ourselves so that I could lift the turkey out of the pan and juice for “carving” with a pair of heat-proof rubber gloves. But when I lifted the turkey…. to our shock, all the meat literally fell off the bone.

And I mean, ALL the meat.

Both breasts slid off in chunks, like a landslide, and then almost cartoon-like — the wings and thighs dropped off — plop, plop, plop, plop– into the broth.  And there I stood, my eyes wide as saucers, holding nothing but a meatless turkey carcass.

Gail and I stood there, up to our elbows in steaming turkey parts and juice, trying so hard not to laugh as we stared at the skeleton I was now holding in disbelief. Instead of carving the turkey, we had to serve it more like pulled pork.  There was nothing, really to photograph.  You’ve seen one meatless turkey backbone, you’ve seen them all.  But it was the juiciest most delicious turkey  meat we have ever had!  I am seriously contemplating repeating my “Accidental Turkey” recipe on purpose next year.

The second biggest hit was, at least for me, the pecan pie!  I culled together all the best advice I could get and came up with what will be my go-to pecan pie recipe from now on!   The best part is that there isn’t much “eggy-goo” — just a  delicate, buttery, rich praline-like filling chocked full of pecans. By making a layer of chopped pecans, and then arranging pecan halves over the top of the pastry,  you end up with a beautiful and crunchy pie!

So before I forget how I made it, here’s the recipe! 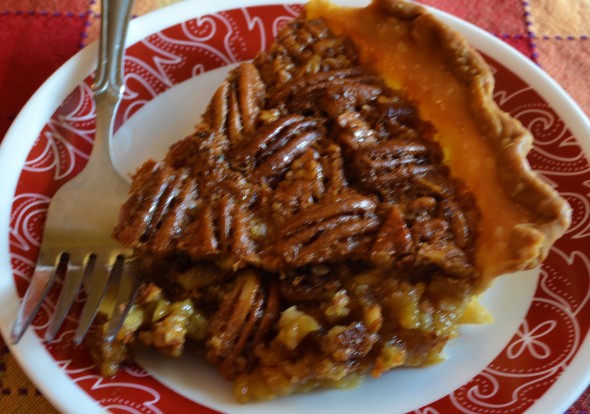 1 cup dark Karo  (corn) syrup  (I don’t like using or eating much corn syrup, but once a year, it is worth it!)

In a medium mixing bowl crack and beat the eggs, then add the sugars, the butter and flavorings and stir well with a whisk.

Into prepared, uncooked pastry shell, spread the chopped pecans.  Now, over the chopped pecans, arrange the halves in a pretty pattern, side by side.  Very slowly and carefully pour in the filling and the pecans will rise to the top, and surprisingly, won’t shift around much — so the pattern will stay beautiful.   Bake at 325 for about an hour or until the crust is is deep golden brown and the filling is set.  I like my pies to lean a little on the extra brown side as the crust does not get soggy.

Dish with us! Cancel reply