← Nourish Your Relationships: 6 Ways to Be the Crazy Aunt (Or Grandma) Kids Love
Nourish Your Soul: A Tall Drink of Peace →

Rustic Shepherd’s Pie in an Iron Skillet & Memories of Mom

My husband Greg’s mother, Shirley, made him Shepherd’s Pie when he was a boy growing up in Oregon. As a girl growing up in Texas, I have had Taco Pie, Tamale Pie and Frito Pie — but Greg had to describe his mother’s Shepherd’s Pie to me. It took me a couple of tries, but it wasn’t long before I served him a slice of pie worthy of his mom’s memory. How I wish I had known her. Greg played me an old video of Shirley when she was about the age I am now, doing the Charleston to the delight of her kids and grandchildren. I am sure we would have loved each other!  Shirley passed away much too soon, when Greg was still in his thirties. She would have been 82 years old… today. Happy Birthday, Shirley, I hope you can see how happy, kind and generally all-around wonderful your son has grown up to be, from your window in heaven.

Greg’s mother, Shirley, at age 15. Greg has her full lips, and cheerful smile. (And when he had hair, he had his mother’s red hair as well.)

You can see my husband’s feet, as he was standing like a happy, hungry little boy in the background, waiting for me to hurry up and take a picture of this Rustic-Style Shepherd’s Pie so he could carry the hot pan back in the house and enjoy it for supper:) 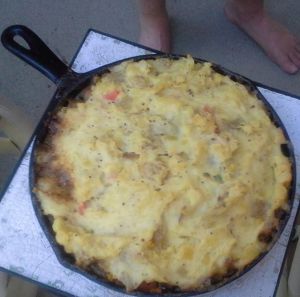 Over the years, I have simplified the recipe so I can make it faster and easier. By using Golden Potatoes instead of Idaho potatoes, I can simply “smash them” in the pan I cooked them in, without peeling them or using a mixer to make them smooth and fluffy. We like a few chunks of potato and bits of peel in this recipe. These potatoes also taste buttery without having to use a ton of butter. Finally, by baking the mixture in the same iron skillet where I cooked up the gravy, meat and veggies – you save having to wash yet another dish.

Re-creating your mate’s favorite childhood recipes is the closest you can get sometimes, to allowing them to filled “hugged again” by someone they loved as a little boy or girl.

Happy Birthday, Shirley! I am doing my best to keep your boy happy, and well-fed and well-hugged.

If you want to wear something in a pretty shade of green, may I suggest you buy a copy of our book, below, and attach it, like a little sandwich board around your neck.  It is what all the cool Irish folk will be wearing on St. Patty’s Day! 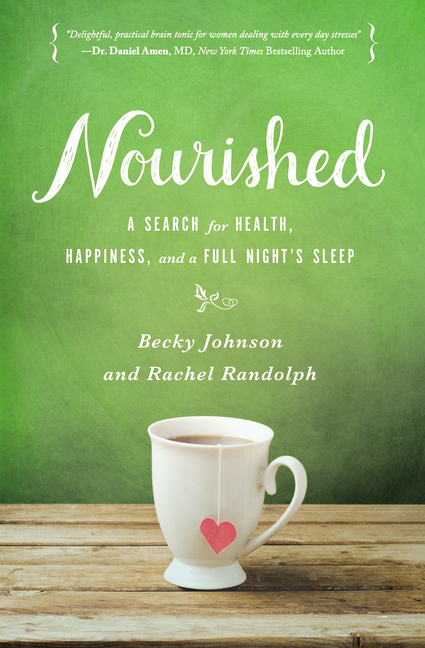 What recipe did your mother or grandmother make that brings you back to her kitchen, and happy moments? 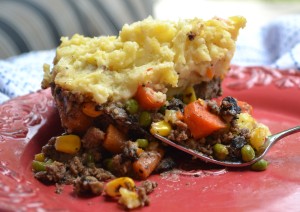 Preheat oven to 350 degrees
Scrub and quarter potatoes,  but no need to peel, then place in a large pot with salted water (about 2 t. salt & water about 2 inches above the potatoes).Put them on the back burner to boil and in the meantime…

In a large skillet, lightly brown the beef with grill seasoning, then drain off any extra fat. Then add the mushrooms and cook untl they are soft and have released their juices. Next add the frozen corn, frozen peas and cooked carrots. Heat through.
In a separate iron skillet, make the gravy: melt butter with olive oil on medium high heat. Sprinkle flour over the bubbling oil-butter mixture and stir with whisk to make a smooth paste. Add garlic and stir. Continue to whisk while slowing adding broth and wine, stirring and simmering until gravy has thickened. You don’t want it to be too thick… as more liquid will evaporate with baking and some will soak into veggies.

Carefully pour the meat and veggies into the gravy. Add half-n-half if you desire a creamier gravy. Taste and adjust seasonings. Turn off the heat while you smash the potatoes.

Drain the boiling water off of the potatoes when they are tender,  leaving hot potatoes in the hot pan. Add Ranch dressing, butter and half-n-half or milk, ¼ cup at a time and smash (with skins on) with a potato masher. (Don’t use a mixer as there is too much gluten in golden potatoes and you’ll end up with glue.) Season potatoes with salt and pepper to taste.
Using a large spoon, gently put mounds of potatoes over the beef and veggie mixture, and spread evenly to the edges of the skillet.

Place in 350 oven for 20 minutes or until heated through and tops of potatoes begin to get a little golden.

Let sit for 5 to 10 minutes and serve. When it is fresh and hot out of the oven it is easier to serve in wide bowls, but the next day, after refrigeration, you can slice it like pie, heat up in microwave and serve.

I like to serve a few fresh slices of tomatoes with this dish and call it dinner!

Dish with us! Cancel reply