My husband had surgery on Thursday for a deviated septum and to keep him company while he rested in the living room, breathing like Darth Vader, I went on a nonstop experimental cooking spree.

I suddenly morphed into one of those chefs on America’s Test Kitchens, except that I cook without cleaning as I go, so it looked like unsupervised Kindergarteners were allowed to play with food on my counter tops.

I made this mess in less than 20 minutes. I do this sort of thing with amazing regularity.

At one point I was happily and furiously cooking when I lost my grip on a slippery lemon just before it became airborne and hit me in the head. My mother warned me about hot stoves, boiling water, and sharp knifes when explaining kitchen safety,  but nobody told me to beware of flying citrus.

I am most interested lately in cooking with foods that are known to help lower blood pressure.  My BP was up last week and all medications I’ve tried thus far make me feel like a sloth with a migraine. I’m determined to try to let “food be my medicine” as best I can, and see if I can wrestle those numbers down without pharmaceuticals.

So when Greg said he’d like some tomato soup,  I got inspired and created a super-healthy vegie-tomato soup, chocked full of foods known to  help lower blood pressure.  When I took a sip,  it was truly delicious. Something about it reminded me of Bloody Mary mix, so I added some typical Bloody Mary ingredients (Worcestershire, celery seed, lemon, hot sauce)  to jazz it up even more, then used chopped celery as a garnish and a celery stick as a “stirrer.”  Cute, eh?  And the taste?  Amazing!  It was so good that after Greg and I enjoyed hot soup for lunch,  I sipped a nutritious, warm mug full at mid-afternoon for a snack.  Today I enjoyed it cold, adding tiny diced cucumbers and a little parsley as a gazpacho-like treat.

The basic recipe can be played with dozens of ways, adding bits of veggies that are on hand in your crisper.  Hot or cold, I’m proud to share this soup that is as tasty as it is healthy. 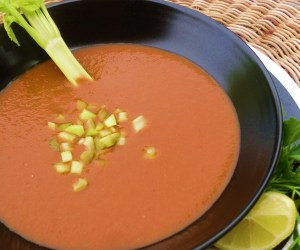 28 oz. can crushed tomatoes with basil

1 handful fresh spinach (about a cup, loosely packed) (You may also use fresh basil if you have it on hand, instead)

2 stalks celery diced small, for garnish (about 1 T. in each bowl)

Celery stalks with leaves attached for garnish, one in each bowl

In large blender or food processor put ½ the can tomatoes, garlic, onion, red bell pepper, carrot, celery and spinach and 1 c. veggie broth.  Blend on high until as creamy as you your machine will get it.

Pour mixture into large pan, add rest of can of tomatoes (the crushed tomatoes will add some texture to soup, but if you prefer it smooth, whirl in the blender as well)  and rest of veggie broth, almond milk, sugar, salt and pepper.  Bring to boil, stirring often.  Turn heat down to medium and simmer for five minutes. Remove from heat and stir in Worcestershire, celery seed, dash hot sauce and juice of ½ fresh lemon.  Taste and adjust seasonings to your liking.   Garnish with a tablespoon of chopped celery and stick of leafy celery and serve.   Delicious with grilled cheese or grilled roasted veggie  sandwich.

Variations: Try other veggies in this basic recipe.  Add chopped cucumber,  chopped green onion and/or diced tomato and serve it cold, like a refreshing gazpacho.

This was printed from: We Laugh, We Cry, We Cook